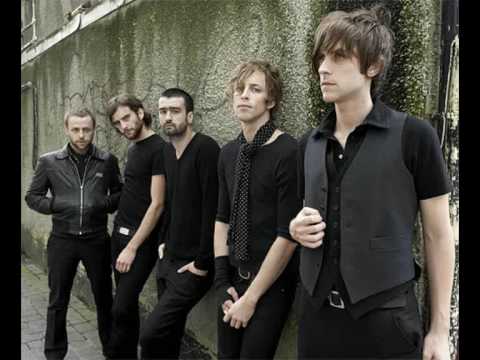 It had been a wild half-decade ascendance – signed to RCA in 2000 as nineteen-year-old experimental rock wunderkind, they were ensconced in an ex-farmhouse studio on the outskirts of their Reading hometown for almost two years, preparing and recording their debut album ‘See This Through And Leave’. A ferocious rock record unafraid of challenging listeners and shattering genres, here was a shape-shifting six-piece of future punk stormtroopers with the hair of the devil’s own pack dogs and not a care in the world for scenes or fashions. Team Cooper was born. And recruitment was brisk.

By the release of second album ‘Kick Up The Fire, Let The Flames Break Loose’ in 2003 – again recorded reclusively in Reading and with the minimum of record company interference, Team Cooper had become an army capable of breaking into the Top Twenty without the need for crossover radio support or heavy rotation videos. Gigs became riotous devotionals. They played one triumphant US headline tour and a second set of arena dates in support of The Cure. The Cooper Temple Clause were going stratospheric.

Then 2004 saw a shake-up at RCA leaving TCTC without an A&R man and with a new, unfamiliar set of faces and ears in charge who hadn’t grown up with, and therefore didn’t quite ‘get’, their isolationist methods and slash and burn musical direction. So, as the ‘Kick Up The Fire…’ campaign wound to a close there began a period of uncertainty and miscommunication between band and label. The Coopers once more holed up in their Reading pig farm to record demos for third album ‘Make This Your Own’ with long-term producer Dan Austin. After 12 uncertain months, eventually RCA re-signed the band and sent TCTC into the studio with ex-Adam & The Ants man Chris Hughes at the desk. He encouraged the band to return to their roots, when all six would swap instruments for each song and also share singing duties.

“Ben has always been the front man and that’s how it is,” says Dan Fisher, “But not many bands have three guys who can sing and have very different voices and Chris said we’d be stupid not to use it. Ben’s voice is a good old rock voice, Tom’s got the dulcet Barry White tones and I sing like a girl, and it works, hopefully.”
“It just made sense,” Ben adds. “Especially the songs where these guys sang it with a lot better intensity and better than me singing it.”

As could be expected, the record they made is fabulously unexpected. Opening in familiar dancefloor rock territory with the anti-music industry rant ‘Damage’, it soon swerves into unmapped musical sectors often utterly unrecognisable as a Cooper Temple Clause record. There’s radio-friendly emo pop (mostly Fisher-sung songs ‘What Have You Gone And Done’ and ‘Waiting Game’), soulful Dears-gone-Erasure tunes (mostly Tom-sung tracks ‘Connect’ and ‘Isn’t It Strange’), Lilac Time cool folk (‘Take Comfort’), laptop blip-rock (‘Once More With Feeling’) and dark 80s krautonica (‘Head’) on here, and all of it as concise and melodic as you’d never have imagined TCTC to be capable of.

‘Make This Your Own’ is a courageous leap out of the post-punk safety net and into a commercial Nu Coopers realm. So, inevitably, RCA didn’t get it, and all this while TCTC were still reeling from the unexpected departure of bassist, new dad and mental crowd-surfing nutjob Didz Hammond to join Carl Barat’s new band Dirty Pretty Things.

“It’s all very amicable,” says Fisher. “I guess he just felt it was something he had to do. It was a difficult time. At first we were worried about losing the onstage chaos that Didz brought to the band but there’s nothing you can do about it, you can’t hire in a madman. We lost Didz’s big personality and I guess it changed our whole attitude. We were gonna have to apply ourselves a lot more thoughtfully and be far more professional about the way we went about things. There’s a real strength now in the way we play that wasn’t there before. There’s a real punch and a power to it and a directness that wasn’t there before.”

“A brother has left the family home, but will never leave the family” read TCTC’s official website, and like all the strongest families, those left behind pulled ever closer as a result. They restructured as a five-piece and, determined not to be dragged under by extraneous circumstances, set out on a tour of back-to-basics club gigs to air their tremendous new direction. They found their fanbase, after two years starved of new Coopers material, still ravenous for their music and sated them with an internet-only release of ‘Damage’ to bridge the ever-widening gap between albums two and three. And sure enough, it was mere months before the band were snapped up by Sanctuary records, who didn’t see a band slightly underperforming at the cash tills but a band striving to make original, challenging and invigorating records.

Ben sums it up. “We ended up with this album that we’re all immensely proud of and we really love and really enjoy playing live. We were always happy to follow our own course, our own journey and the bands we really admired were the ones who progressed from album to album and made a different album each time and weren’t afraid to challenge themselves. That’s what we tried to do with this album. It is a very different sounding Cooper Temple Clause from the last record.”

Fisher adds: “There’s still a lot of people out there who haven’t made their minds up about us.”
He grins broadly.
“And it’s time for us to make their minds up for them.”